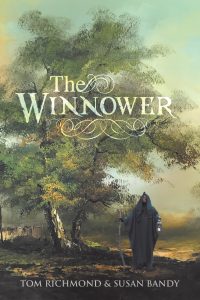 In 1827, a cult in Western Illinois sequesters themselves.  Shunned for their beliefs in polygamy and living in a colony by themselves, they struggle to adapt to their new environment.  They were driven from their colony near Rochester, New York, and they now isolate themselves in Illinois.  They are guarding against the day when others will attack them.

Outside the community, they feel danger, but what is going on inside their own community?  A winnower was chosen to purify their people, but what’s gone wrong?  They must homestead their land and create an area where they can survive and raise their families.  With help from Indian tribes in Illinois, a young Tobias learns to help his colony survive and grow as he becomes a man and begins his family.  Frightful experiences occur not only outside, but on the inside of his colony.

The Winnower is a unique tale addressing leadership and following leaders who represent their values and ideals.  Through the use of factual historical background, a young man comes of age as he becomes the leader In this tale of coming of age and and fighting for those he loves and respects, even though they have different ideals than his.  This is one read you won’t want to miss.

Released in October of 2017