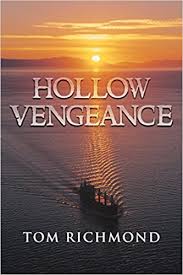 Frank Barrett meets Ramsey Davis at Ft. Walton Beach, Florida.  He finds himself deeply in love and marries Ramsey to begin the next chapter of his life.  But, Frank must leave Ramsey, as he reports for military duty.  Frank, a pilot in the U S Air Force, reported in December 1970 during the escalation of the Vietnam War.

Frank was lucky.  He returned to his wife as an ace captain and experienced pilot.  Everything was great again.  THEN, tragedy  strikes!  Frank is witness to the loss of the love of his life, pregnant with their first child.  A drug runner named Little Eddy causes this cold blooded event and Frank is filled with revenge.  Frank is filled with grief and rage,  as he pursues Little Eddy to seek the ultimate measure of revenge to settle the score.  He leaves Eddy for dead in Panama.  But, as a cat with nine lives, he turns up again in Florida.  Will the Mafia get to Little Eddy before Frank does, or will he succeed?

Hollow Vengeance is a story of love, loss, and revenge which follows Frank from Florida to Panama to Southeast Asia and back.  Frank tries to find peace and get retribution for his wife's and baby’s death without losing himself.  Can that rally be done?  Vengeance is hollow and hurts the hunter as much as the hunted.